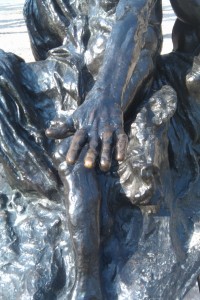 In the seat opposite, the harsh florescent light bathing him like a corpse, the man held up his left hand and examined three broken fingers as if they were connected to a wax statue, a flaw in his design that he would have to see about correcting.  Their eyes met and the man smiled apologetically.  Luke looked at the floor where a pool of rain had collected, running off his overcoat.  He slithered free from the wet garment and stepped up to the admissions desk where a weary looking nurse bent her head over a stack of papers, the look on her face suggesting that these were but the first steps into a river long and wide. END_OF_DOCUMENT_TOKEN_TO_BE_REPLACED